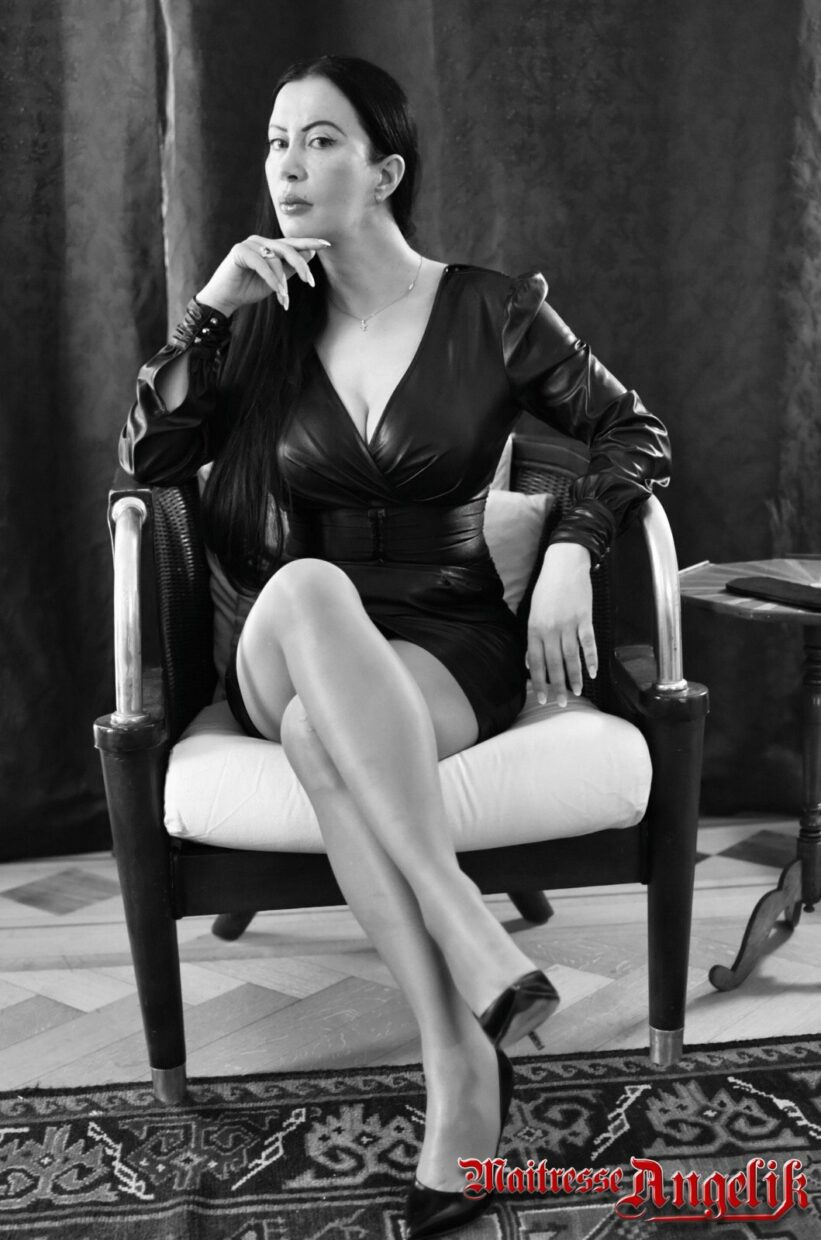 My name is Aurélia, the fifties, rather bitchy, well preserved: I like spanking in all these forms.

Mistress Angelik remaining standing, she made me sit down. We quickly exchanged together on the theme of the upcoming session. Having confessed to her new fantasies (and sins), she began by making me stand up and then undress, ordered me to kneel in front of her and to lay face down on her stool, arms resting on the ground, keeping only on my alluring underwear and corset with bare breasts.

Slowly, she pulled my black panties down to the bottom of my thighs, exposing my buttocks. With her beautiful, fine and expert hands, she began with delicious little slaps on each part of my plump anatomy for a good five minutes, alternating with caresses: how good it was!

I was arching my butt as best as possible, with the shame of finding myself naked and at the same time, feeling this dazzling pleasure invade me already, as his hands seemed to take possession of the fall of my back. The most embarrassing was that she could see, with my panties down, what I have most secret: my privacy already made wet, after her adorable little expert slaps (which also foreshadowed a formidable spanking to come):

• My little Aurélia, this is just the “appetizer”, you know, Mistress Angelik told me, in a mischievous tone …

Between the domina and her submise, things got more serious. With authority, she ordered me to get up then, pointing to what looked like a St. Andrew’ cross, she handcuffed me, arms in the air, took in her hand one of her whip made up of multiple long straps of black leather at the end with a long handle, and placed it prominently in front of me.

Calm, armed with her pretty smile, Mistress Angelik readjusted at the bottom of my thighs, my little black panties through my garter belt, leaving my buttocks bare and better offered to her authority. She pulled back, got into position, a long shiver ran through me from head to toe …

One hiss, then a second, then a third, a fourth faster, then five, ten, twenty, thirty blows followed, slashing my buttocks, interspersed with brief respites … I was thinking of nothing more than these thongs leathers sweeping over my butt: the spanking was REALLY beginning!

Mistress Angelik was getting her way to rock my hips from left to right with her whip: the more my buttocks moved, the more the leather thongs seemed to rain on them. Not wanting to make anyone jealous, Mistress Angelik, quick and precise, switch from one to the other, whipping them almost without restraint (while still controlling the degree of severity inflicted).

• Ah, you do like to wiggle your little buttocks in front of your Mistress, Aurélia, doesn’t you? You can do better, that’s not enough for me: I want to see them move even better. Arch them more!

She then skipped to another whip, chose a less flexible one with harder straps, and continued to punish me, pressing a little more, repeating twenty times her gesture of spanking expert. I implored her with a look, a pause, not wanting to move anymore my hips and buttocks in fire.

She paused then, then asked me kindly:
• How does feel my little one now, you know that your little buttocks are already very red. I can stop, but I would be even tougher if I had to continue, you know that, don’t you?

Still attached, I appreciated her question, reassuring and disturbing at the same time. Even though my cheeks were already burning, I also feared her severity (and at the same time, perhaps wanted it, deep inside me?)

To find out, I had to take the plunge, to go “Beyond”

Mistress Angelik understood it in my eyes and without a word, at the speed of a cat, she put down her whip, exchanged it for a thin and formidable English cane then, made it hiss in the air:

• You see Aurélia, today, I understand that you must be corrected much better than usual, I would have warned you, you knew it: do I give you a key word of deliverance, in case …?

The stinging sensation of the first stroke of the stick made me wince, tuck my butt in, spread my thighs, tuck my back, already foretelling a pretty dark red mark over my recent blushes. Mistress Angelik made me count: One, then Two …, without hearing alternately my ‘Oh’ … and my Ah … ‘(like Mylène Farmer, in her song: “… my little buttocks do not stop to inspire you … ”). Three hisses, then Four, always increasing gradually the force of her blows, counting up to Fourteen interminable and scathing strokes then, I missed the count : Twenty!

Mistress Angelik did not let go of this regrettable error on my part:

• How unfortunate Aurélia, you don’t follow! I start from scratch with fifteen more to teach you, no need to ask my forgiveness: are you counting again?
One, then Two, Three (it was more difficult to bring out my sore buttocks this time), Four, Five, Six…
• Wiggle and stretch them better, Aurélia!
• Yes mistress …
• Who ?
• Angelik.
Seven, Eight, Nine, (it burns terribly …), Ten, Eleven … Twelve (I tend them much less …), Thirteen, Fourteen, Fifteen, Phew … Sixteen (?)
• Indeed Aurélia, Sixteen, to see if you got along well this time!

By now, lots of dark marks on my bottom must have appeared. Mistress Angelik finally put down her terrible cane.

• I’m not going to whip them until they bleed, the little bitchy buttocks of yours, my little one, they are already well marked in this color ‘Technicolor red / dark blue’: but that doesn’t seem enough to you, does it ?

I did not answer any more, my head on fire, my buttocks burning, more than submissive (also trying to hide from her with great shame, that I wet like crazy, my breasts erect). She noticed it, pinched my nipples, then wiped my crotch gently with a tissue. With this salutary gesture, she reminded me that she is controlling Everything during the session (Thank you, Mistress Angelik)

She then relaxed my corset, bared my back, readjusted my panties down again, this time parted my garter belts, then pinched once again those nipples that had become hard … to be damned (with pleasure ..)

More beautiful than ever, she took a third whip, with only one thong this time, stepped back away from me then began without a word to whip me, alternating on back and buttocks gently first, then harder, her formidable thong made of leather. She asked me after a series of Five to Six moves, if it wasn’t too hard for me. I turned around, looked at her, didn’t answer her strangely. So she continued …

What a scathing sensation at the same time, of pain (almost ‘positive’, very different from that consisting in ‘hurting’), of mysterious pleasure too, when it is done so well. I would not pronounce that key word, she continued still, imperturbable, increasing the pace and the firmness of her blows, I spread my thighs, my arms, tucked in more and more my buttocks, Mistress Angelik making, now, dance all my body with her whip.

Finally, she put an end to my “punishment” (at least, I thought …), put down the dreaded instrument, untied me, made me bow low on the ground, face down, buttocks in the air. 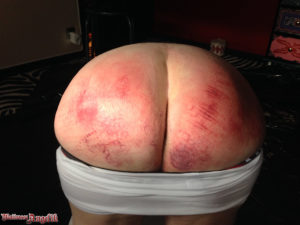 Firmly enclosing my hips between her legs, Mistress Angelik resumed her formidable English cane resting on the ‘submissive’ stool, corrected each of my buttocks another 15 times: they became scarlet, were no longer in the air shortly after this last treatment inflicted, no longer wiggling, finally became fully submissive, imploring, much less provocative …

She stopped, ordered me to stand up, smiled and sat down in front of me:

• Are you getting better now, my little Aurélia?
• Yes, Mistress Angelik.
• You know I could stop or be less severe: you were more “masochistic” than the previous times, weren’t you?
• No doubt Mistress, you spanked me well though …
• Thank you Aurélia, get down on your knees now, in front of your mistress: you are all wet, I can see…?
• Yes Mistress, thank you Mistress Angelik, for being understanding.

Look at my parisian schedule